BLESSINGTON IS TWINNED WITH O’NEILL CITY
By Mattie Lennon
John O’Neill was born in Drumgallon, Co. Monaghan, on the 9th of March 1834 to John and Mary O’Neill.  His father died of scarlet fever, six weeks before young John was born.
His mother, unable to eke out a living in Ireland and fearful for her children’s survival, emigrated to the United States in the latter part of 1835 with two of her children and settled in Elizabeth, New Jersey. John stayed behind with his grandfather,   In December of 1848, at age 14, John left Ireland to join his mother and siblings in the United States where he completed his formal education.  His first job was with a Catholic publishing company as a sales representative  and a number of years on the road he settled in Richmond Virginia, where in 1855  he opened a bookstore.
He joined the local branch of the Emmet Monument Association the aim of which  was to provide military training to young men who  would use their training to rid Ireland of  English rule.
In 1857 he sold the bookstore and enlisted  in the Second United States Dragoons but disillusioned with the lack of action, O’Neill went AWOL and headed west to San Francisco where he spent the next few years.  While living there O’Neill met his future wife Mary Ann Crowe,  an Australian of Irish parents. In 1859, having second thoughts about his desertion from the Dragons he turned himself in and, fortunately for him, was returned to duty without trial.
At the onset of the Civil War in 1861, he was stationed in San Francisco with the 1st United States Cavalry, formerly the Second United States Dragoons.  He returned to the east coast with his regiment who had volunteered for action in the Union Army. In March through July of 1862 the regiment was engaged in the battles of the Peninsular Campaign launched by the Union army in an attempt to circumvent the Confederate Army in northern Virginia and capture Richmond the Confederate Capital.  On June 27, at the battle of Caines Mill,  O’Neill was promoted from sergeant to the rank of second lieutenant for gallantry  He volunteered for service in the Union Army and served as an officer in numerous regiments during the Civil War. 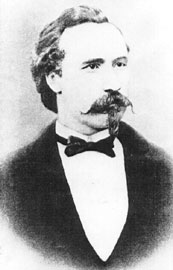 This veteran of the American Civil War had the rank of  “general,”  bestowed on him by admirers because he commanded three Fenian incursions into British-governed Canada, first directed colonists in 1874 to this fertile Elkhorn Valley site which bears his name. General O’Neill also induced other Irish groups to settle at Atkinson in Holt County and in Greeley County. Knowing the agricultural heritage of his people,  he said his object in founding Nebraska colonies was “to encourage poor people in getting away from the overcrowded cities of the East.”
The Irish were a major immigrant group contributing to the settlement of Nebraska. Speaking the English language, they blended into the population and were found in many communities. However, due to ancient animosities with Britain, some of them colonized in America. Foremost colony in this state is O’Neill, proclaimed the Irish Capital of Nebraska by the Governor in 1969.
O’Neill’s real historical significance arises from his service, beginning in 1866, with the Fenian Organization, whose stated goal was to create and support an Irish state independent from British rule. In 1876, O’Neill summarized his feelings with the following statement: “I have always believed in striking at England wherever we could reach her, and wherever the English flag floats and the English government is recognized and there are English soldiers in arms to defend the flag and maintain the government I hold that the Irish people, particularly the Irish Exiles whom her oppressive laws have driven from their native land, have a right to go there and make war on England.”
On June 1, 1866, O’Neill led a Fenian invasion of Canada with the goal of using occupied territory as a bargaining point for Irish freedom. The invasions would ultimately fail to achieve their stated goals and O’Neill was arrested by United States Marshalls upon returning to the United States.
John  O’Neill, the boy from  Drumgallon, led the establishment of Irish “colonies” within the United States. The first Irish colony in Nebraska was set up in Holt County in the town that bears his name today – O’Neill City, Nebraska.  O’Neill died on January 8, 1878, and was buried in Omaha, Nebraska. 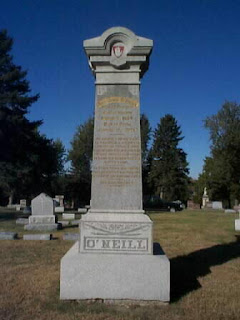 On October 28, 1919, the O’Neill gravesite monument was dedicated with an address by E.H. Whelan. Present for the unveiling was Eamon de Valera, President of the Republic of Ireland. On this day, the following inscription on the monument was presented:
Gen. John O’Neill
Hero of Ridgeway
Born in Ireland
March 9, 1843
Died at Omaha
January 8, 1878
By nature a brave man.
By principle a soldier of
liberty he fought with
distinction for his adopted
country and was ever ready
to draw his sword for his
native land.
To perpetuate his memory
this monument was erected
by the Irish nationalists.
God save Ireland.

John Moriarty was a Kerry  man on whom it would be difficult to put a label. Poet Paul Durkin described  this man of many parts as, “ . . .  Ireland’s most outstanding philosopher-theologian since Bishop Berkeley in the eighteenth century.”   Another writer described him as,  “A missionary in the tradition of the early Irish monks.”

John, whom many described as a mystic, was born in North Kerry in 1938 and educated at Listowel and University College Dublin. He taught English Literature at the University of Manitoba in Canada for six years, and returned to Ireland in 1971.

Eist Recordings  has now brought out a 4 CD set of John’s talks  Celtic Spirituality in which he  explains, in layman’s language what he calls “other dimensions of reality.” Several times in the course of those talks he reminds of how we tend to ignore our spiritual side.  He emphasizes how unfortunate it is that, “ Our eyes become economic brain tumours.”   In this series of talks, which were recorded in Glendalough, brings the listener on a spiritual journey  in which the north Kerry habit of describing a woman as ,”a fine mare” is linked to the Hindu approach to the female.  An inebriated Gaelic speaker, in Conemara, who couldn’t pronounce “W” in English, lost his bearings one dark night and asked John, “Fare the fuck are we”? What other theologian could use that story to illustrate how we are losing our way spiritually?   Even the sentence structure of the Healy-Rayes  is worked into  the spiritual  mix. This CD set is a must.

Details of Celtic Spirituality can be found at www.eist.ie

Lisdoonvarna, County Clare is famous for its annual Matchmaking Festival. It is the location where, in many people’s lives, love-stories began. Now Dublin author and poet Michael Lacey, currently living in Lisdoonvarna, has taken the matchmaking to a new level. In his latest publication The Proud Chamber Pot he matches up a chamber pot named Helaine  with a jam pot called Sam. I won’t spoil it for you with any more details because you see this is actually a children’s story. It is beautifully illustrated by Italian artist Lucia Tripepi.

Oh yes . . .they all lived happily ever after.